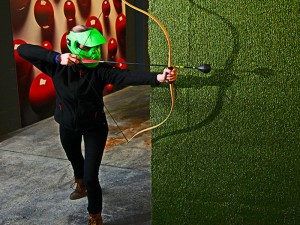 With Archery Tag (or Arrow Tag) the players try to hit a target with bow and arrow. But no worries, instead of an arrow tip, the projectiles feature a soft plastic ball at the tip. In addition, the wooden bow's draw weight is only 20 pounds.

With the provided equipment, the players have maximum protection: facemask, neck guard, gloves and forearm guards.

The players can feel it when they get hit, but it doesn't hurt. Such a hit is a lot less powerful than a hit with a paintball and there won't be any paint splatters. The guests play in their own comfortable, casual clothing. All events are hosted by professional instructors.

Standard: with 30 bows plus equipment all guests are actively playing. Two or more teams fight each other. We have a variety of game modes: 'Team vs Team', 'Conquer the Castle', 'Capture the Flag' and many more. The individual rounds last for about 10 to 15 minutes each. There are short intervals where the players can help themselves to refreshments.

Tournament: the participants are split into several teams. Up to 30 players in teams compete against each other. The remaining players skip a round and take a break. Each game takes 10 to 15 minutes.

Combination Laser Tag and Archery Tag: the guests are divided into two groups. One half plays Arrow Tag while the other half plays the laser game (also known as Laser Tag).

Tournament (Laser Tag combinded with Archery Tag): same as Option 2, half of the participants are active while the other half takes a break, swapping after about 10 to 15 minutes. The teams fight for victory with both laser guns and bows and arrows.

What is Laser Tag?

Here the players aim at each other with laser guns. The technology is spectacular while completely harmless and combines tactics, team cohesion and excitement in the best possible way. After half time, the activities are swapped. This way up to 60 people are active simultaneously, enjoying the best possible variety.

Depending on the group size, we extend the play area of the theme 'Surreal Area' and combine it with the 'Dystopia Area'. This creates a huge indoor playing field. Refreshingly cool in summer and pleasantly warm in winter.