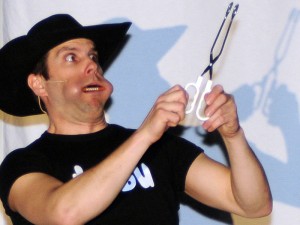 Christian has made the classic career of a successful comedian. Starting as a child he kept his schoolmates and his family on their toes and entertained them with jokes. It was a given that he would join the renowned Schwager Institute in Olten for the years 2000 to 2003.

Parallel to his successful education Christian founded the 'Duo Lampefieber' (Duo Stage Fright) together with his friend Daniel Schneeberger. Soon after a few private performances with acts from famous comedians they started to shine with their own programmes. It wasn't long before they could reap the fruits of their labour and were awarded the 'Little Prix Walo' in the sector Comedy/Variety in 2003.

After the members of the duo had decided to go their separate ways Christian didn't hesitate and came up his first solo programme. He was blessed with success: in 2005 he was again nominated for the Little Prix Walo. Performances at the Comedy Night Meligen and the Comedy Night Lueg are also important highlights in Christian's career.

At the very latest after sharing the stage with Swiss comedy stars like Divertimento, Peach Weber, Annette Corti, Duo Full House and Rob Spence Christian Mark became a household name. In order to reach more of his fans he toured Switzerland in 2007/08 with his solo programme. Christian performed on such well-known stages like the Tabourettli in Basel or the Theatre 'am Käfigturm' in Bern.

Christian distinguishes himself not only with his exquisite humour and wittiness but also with his extraordinary acting talent. This enables him to credibly play characters like a rapper, a wall flower and even a play station addict. An absolute joy for an audience which loves this sublimely funny entertainment.

Looking for more about this topic?

Anywhere in Switzerland and abroad

Anywhere in Switzerland and abroad